Showing posts from March, 2011
Show all

The great thing about Maui, actually all of Hawaii, is that the beaches are all public. There are no private beaches, parking is free, although limited, and the beaches are beautiful, pristine environments. That being said, we have some of our own rules regarding Maui Beach Weddings: The main one is that we will not perform a ceremony on a public beach for more than 25 or 30 people. There are several reasons for this. Parking is the main one. The comfort and satisfaction of our couples is another. A large group leaves a big footprint and since there are always other people on the beaches (They are public), a large group has a hard time fitting on a beach. Also, a large group will not be able to hear even the loudest officiant, especially when competing with the sounds of wind and surf. Since we are not allowed chairs, arches or any types of "props" on a public beach, a semi private or private venue is an ideal place for a large group. We can have chairs, arches, etc., all in…
Read more 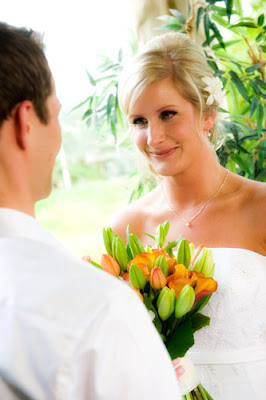 Occasionally, it rains on Maui. Not very often, but once in a while, we'll have to pull out the umbrellas. The two main resort areas, Kihei/Wailea/Makena and Lahaina/Kaanapali, get about as much rain per year as Santa Fe New Mexico, which is to say it's generally dry in those areas but when the Kona's kick in, moisture is sucked up from the south and it may rain for a couple of days. This was the case with Helga and Cecil. They shrugged off the weather and had a great time. The lanai at the condo they were staying at was huge and more than accommodating for the 15 people in attendance, so we had the ceremony there. Everybody had a great time. Thanks Helga and Cecil for not letting the weather get in the way of your big day!
Read more
More posts